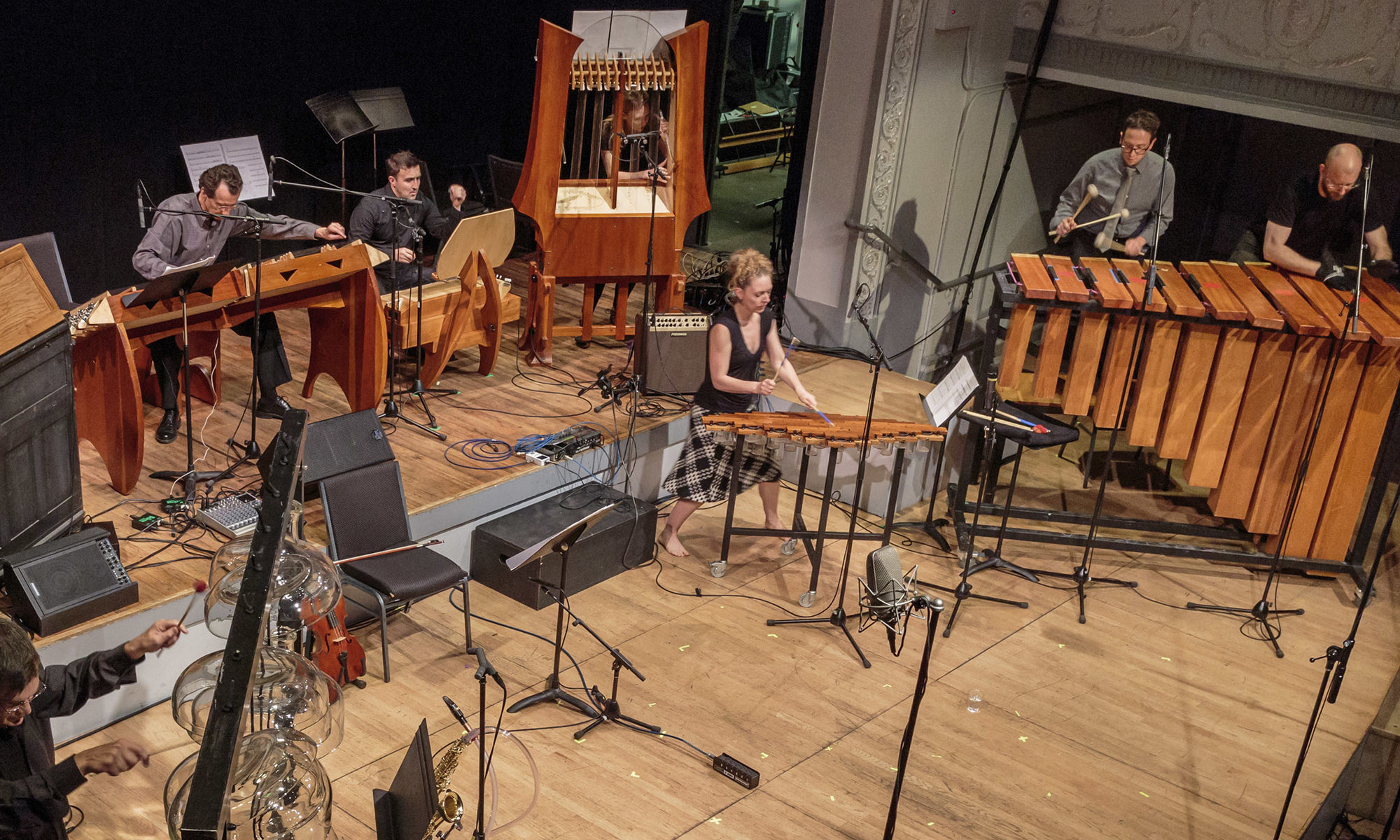 re-Genesis of a Music
~  A tale of obsession  ~

Theoretically, I was good to go:

1. I had the score to the solo version of Barstow (1941)
2. I finally knew what actual pitches the dozens of ratios in the music referred to
3. I knew how the original Adapted Guitar I was strung and tuned

But most importantly, I had ‘crossed the Rubicon’ and decided that, in order to do the piece justice, I had to recreate not just the notes, but the actual guitar itself. But how far should I go? He couldn’t make standard fretwire work, so he had used “high, stainless-steel frets into slots in a brass plate, which was then screwed onto the neck…” I had access to luthiers who could work with regular frets…perhaps I could reverse engineer the guitar by simply finding which frets I would need to play the piece.

While first attempting to transcribe the piece, I had already gone through the score and determined that Partch had used 39 notes to the octave, but that was for both the voice and the guitar parts. So I wrote out just the guitar notes:

and since the score was written in tablature, I knew exactly which string had to perform each note. Next step? draw a model of the fingerboard:

Looked good…but how would I know if I was right? There was no recording of this earliest version of the piece, and the famous Columbia Recording didn’t even have a guitar in it. If I only had a photograph of the guitar!

Ironically, I knew exactly what kind of guitar it was—a 1927 Koa-wood Martin parlor guitar—as there was a picture of it in his book Genesis of a Music. But years before, Partch had removed the high frets, restrung the instrument with six equidistant G-strings, and turned it into a slide guitar by raising the strings and covering the brass slotted fingerboard with a thin board with painted lines.

There were simply no photos of the original fretting available: I was on my own.

BUT – I remembered that in McGeary’s catalogue, there was mention of some 1945 acetate recordings made by an amateur recordist that included the 1943 version of the Barstow with kithara, guitar, & chromelodeon…so I started making phone calls. Lots of phone calls. This was pre-internet, of course, so research meant letter writing and a huge telephone bill. I was able to track down Dr. Warren Gilson in Wisconsin who had made the recordings, and though he fondly remembered both Partch and the sessions, the details of the instruments were a blur and his records were long gone. I was, however, able to reach Partch scholar Richard Kassel, who kindly mailed me a cassette of Gilson’s recording. I listened to it over and over again,  for days on end, to get the sound of Partch’s guitar into my head.

In the meantime, I had acquired a classical guitar that had a special fingerboard invented by the German luthier Walter Vogt that used sliding frets such that each note on every string could be individually tuned.

If I could fret that guitar with the proposed Barstow frets that I had worked out, then I would know if I was on the right track. Since the strings of the Barstow guitar were basically three pitches Eb-G-B (doubled at the octave like a 12-strings), I tuned the 4th string D up to Eb+14¢ [a pure Major 3rd below the 3rd string G], and tuned the 2nd string B down 14¢ to be a pure major third above the G. I then slid the frets to match the pattern I had worked out. Mind you, I didn’t have a proper electronic tuner to tune the frets, but I did have a Yamaha DX7-II synthesizer that I had tuned to the Partch scale, so I carefully matched the frets to the keyboard pitches, sliding one fretlet at a time until they were in sync.

With the tuning and fretting finally done, I gingerly played the opening chords that I had been listening to for weeks. To my amazement, the same strange chords that had been emanating from my stereo were suddenly coming out of the guitar in my lap. It worked! I rapidly went through the score and tried all of the chords, and they all checked out. Time to make some sawdust!

With incredible luck, I had been able to locate a Japanese copy of a pre-war Martin, and took it to the Los Angeles luthier Greg Brandt, who pulled the frets, and prepared the recently vacated premises for its new tenants. He then re-drilled the bridge to place the six strings in three pairs rather than the original equally spaced sextet, and we strung it up. Then, using a piece of fretwire that had the tang ground off, we slid the fret over the smooth ebony surface to mark where each fret should go, using the synthesizer to tune each note by ear.

What a job! First I would find the right note on the synth, then step on the sustain pedal so that the pitch hung in the air while we moved the fret wire up & down until the two notes matched. The slightest move to either the right or left created beats, so the process was very exact. Three hours later, the 27 exact placements had been marked before Greg could make the precision cuts in the wood and start hammering frets:

Three days later, Greg called with the news, “The guitar is ready!” It had taken a professional to accomplish the delicately difficult job of refretting that Partch, a self-proclaimed “philosophic music man seduced into carpentry” was not able to achieve.

And so, in August of 1992, Partch’s original Adapted Guitar was reborn. There in the workshop, I picked up the instrument and began strumming the chords that I had memorized. The paired stringing made the chords very easy to play, and this time, I not only recognized the same chords as the original score, but also the same exact twanging timbres that had been buried in those crackling acetate grooves half a century before.

What a journey! The seeds that had been planted way back in 1978 and the quest that had begun in the Spring of 1991 was over: the music & guitar that I had virtually lived, breathed, slept and eaten for a year and a half was a reality once again. With boundless enthusiasm, I began to rehearse an within six weeks, I was performing the piece in public:

A year later, I had the pleasure of recording the piece for the Bridge Records album Just West Coast, giving listeners a chance to hear the piece as Partch himself had originally conceived and performed it back in the 1941-42:

It turns out that after 1942, Partch started re-orchestrating Barstow, adding new instruments as he invented them: first in 1942, with two voices and Chromelodeon, then in 1943 adding the Kithara, again in 1954 using the slide version of the Adapted guitar with Surrogate Kithara and Diamond Marimba, and finally in 1968 with no guitar whatsoever, but adding his bamboo marimba called the Boo.

But was I right…?

It wasn’t until nine years after I had completed the guitar, having performed Barstow on three continents, that I finally saw a photo of the original guitar with the original stainless steel frets. After all, the music worked – I played and sang every note in the score, but did I get the instrument right? Were my best guesses at the frets and strings correct…?

In 2001, I produced a Harry Partch Centennial Celebration at UCLA, a 12- hour extravaganza of lectures, films, panels, and a concert. At the event, the Harry Partch Foundation presented an exhibit of photographs from the composer’s life in the lobby of Schoenberg Hall. And there, amidst dozens of unforgettable prints, to my profound relief and delight, was this photograph:

Turns out that I was right after all. (Whew!!)