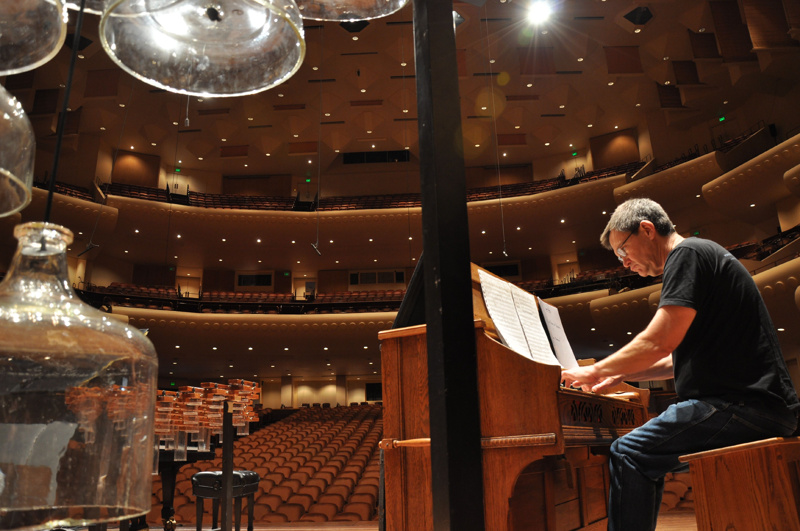 In 2001, David Johnson was the first musician recruited by John Schneider in his quest to build a new set of Partch instruments, and the fledgling ensemble that would become PARTCH first began. David, then faculty at the California Institute of the Arts, was a central figure in the band until 2016, providing a rehearsal venue and storage for the band’s instruments from 2006 to 2018, as well as tapping several former CalArtians to fill PARTCH’s ever-growing need for performers.

Originally from Port Angeles, WA, David’s musical upbringing focused around the piano and organ, before settling on percussion as his professional musical voice. His skill set was commensurate with that of a classical percussionist, though his passion lay in jazz and improvised music of his time. The era was the mid-1960s, and after one year of study at Peninsula College in Port Angeles, David transferred to the University of Washington to focus on his Bachelor of Music degree, focused on orchestral percussion.

A fateful meeting with legendary percussionist John Bergamo would change David’s life permanently. Bergamo had just helped found the California Institute of the Arts, serving as the Institute’s first Head of Percussion Studies (a position held until his resignation in 2002), and was in the midst of a recruiting trip…literally driving up the west coast of the United States, picking up any and all interested students to join him at CalArts. He met David at the University of Washington, and after hearing him play, offered him a full scholarship and ride to California. David jumped in the van and never looked back.

He completed his undergraduate studies at CalArts, and was immediately recruited to join the Black Earth Percussion Group, one of the nation’s premiere percussion ensembles. He lived in Champagne, Illinois, home of the University of Illinois, and Black Earth’s main academic support. After touring and recording with Black Earth, David settled back in Los Angeles to work and raise a family in 1977. After a brief teaching appointment at the Winword School, David was offered a part-time teaching appointment at CalArts, a position he would remain in for 26 years, eventually taking over for his teacher and mentor Bergamo as CalArts’ Head of Percussion Studies, working with hundreds of students in the percussive arts, including many of the current members still playing in PARTCH.

In 1970, shortly after arriving in Los Angeles, David met Dean Drummond, fellow percussionist and then resident of San Diego, where he studied and played with composer Harry Partch and his strange family of invented instruments. Dean and David became fast and lifelong friends, with Dean inviting David to visit him in San Diego, to meet Harry and personally experience his musical world. The two friends made the trip together, and the impression Harry Partch left on the young David was enormous. When the opportunity came, years later in 2001, to join a new ensemble focused on the compositional output of Harry Partch, David would not hesitate…and after 15 years, thousands of rehearsal hours and hundreds of concerts, PARTCH would rank as one of David’s highest musical achievements.

His work as a freelance percussionist in Los Angeles boasts an impressive resume: primary ensembles include XTET, the New Century Players, the Kim Richmond Jazz Orchestra, the Vinny Golia Large Ensemble, Dark Wing, Roger Williams, and the Lian Ensemble. He has worked with the Los Angeles Philharmonic, John Zorn, Pierre Boulez, Wadada Leo Smith, Yusef Lateef, Stuart Copeland, Green Day, Dave Brubeck, and the California Ear Unit; he has performed on over 40 major motion pictures, including Spiderman 3 and The Matrix. A noted composer in his own right, his work Quartz City for vibraphone solo with percussion ensemble won the Percussive Arts Society Composition Competition in 1995; other major works include The Oregon Variations for marimba soloist and percussion quintet, Shape Shifter for vibraphone and marimba, Dark Wing for cello and marimba, and Nine Sheets to the Wind for a mixed chamber ensemble and improviser. His book, “Fifteen Etudes for Vibraphone,” along with his other percussion-based works, are published by MalleTech, and many of his compositions have been  included on the Lian Records Dark Wing CD “The Hidden Sacred” and on “Dual Force,” recorded with guitarist Ken Rosser on the Nine Winds label.

David retired from CalArts in 2017, and has since relocated to Port Angeles, where he lives and stays musically active performing solo piano renditions of traditional jazz standards, now and always his first musical love. His contributions to PARTCH are numerous and unforgettable, from his first stints behind the Bass Marimba, to the amorphous and deceptively complex Cloud Chamber Bowls, before finally settling behind the Chromolodeon. David’s tri-level residential building in the Mt. Washington neighborhood of Los Angeles would serve as PARTCH’s de facto headquarters for nearly 12 years,  the definitive roof over the ensemble’s head.

David’s contributions to the band can never be forgotten, and certainly his musicianship, his joy, and his friendship will never be replaced. PARTCH, the band and the music, will be forever richer for his contributions.